The work for the exhibition was completed September 2016.

The project has been featured on Radio Scotland three times, TV Border and in many newspapers and magazines.

And the first exhibition took place at the Textile Tower House, Hawick Oct-Dec 2016.  They loved it and declared it their ‘feel good exhibition of the year’.

There will also hopefully be dates in Dalmellington where I live, that is being worked on at present.

Cycled 15 miles or so in a strong headwind, mostly in a low gear even on the flat. Lovely people and the cafe in Kelso told me to stay as long as I liked. Did I really look that knackered?! Bought a new cycle shirt as mine had snags on the front and the grubby marks will no longer wash out.

Bicycles in all the shop Windows In anticipation of the Tour Dr Britain, passing through on 8th September. Also Honda goldwings everywhere – they have a gathering this weekend.

Home in 11 days time and having a ball.  Visit to The Border Mill in Duns today.  They process alpaca on a small scale for producers. Bought some wonderful fibre and they also sell yarn.     The White Swan at Duns is lovely.  Plain but homely which suits me fine with the most awesome of pub meals in their humble bar.

Always wanted to see giant puffballs and there they were at the side of the road  Not a place you would walk and cars would never see them. Oh the joy of a bicycle. And of course they are now on the ‘must crochet or knit’ list.

Lovely to see everyone and there is nothing like spinning outdoors. All so relaxed.  Haddington Spinners are a hardy lot and camped in Angela’s horse field whilst I had a lovely comfy bed in her spare room.

Thrilling to be on the east coast because not only have I cycled up Scotland as far as Dingwall but I have now also gone from one coast at Ayr in the West to Prestonpans on the other side. Dipped a finger in the water just to prove it!

The time is whizzing by now I am nearer home and have less than three weeks to go. This workshop a couple is days ago was at Victoria Bennett’s house in Edinburgh.  She is also a jazz singer and has a show at the Fringe this year.  Last night I gave a talk with slide show at penicuik arts centre.

Today I cycled 26 miles and am now at Longniddry staying with Angela and Bill. Haddington spinners are camping in the horse field and tomorrow I am doing a wee workshop with them on longdraw spinning. Wonderful fun tonight sitting in the field!

Cycled from Paisley to Glasgow then hopped on a train to Lanark.  We passed through Uddingston where I spent ost of my childhood. Lanarkshire still feels like home and the people just seem to speak my language.  At New Lanark my wee workshop shared the space with the Quaker Tapestry.

Cycled back from Paisley to Glasgow. Virtually the whole way is off road on good tracks. Peaceful, quiet and lovely. Glasgow has great cycle ways. Hopped on a train to Lanarkshire and it iscwindy tonight again.  A blast from the past as my first ‘proper’ job was in Lanarkshire. This was my local and still going strong.

Seals on a rock finally finished. Off to Lanarkshire tomorrow. Feeling creative! 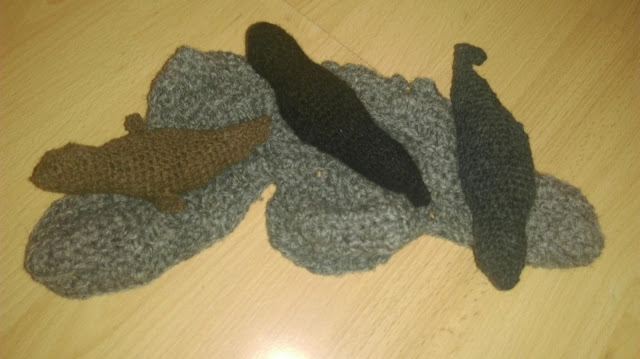